Mom Stratton reporting here as guest blogger. As mentioned in the previous posting, I bravely boarded the plane to Bangkok on April 20 despite learning that April is the hottest month in Thailand. But it was now or never. As Brad and Abbey reported, we successfully met up at the hotel and did some sightseeing in the city, then took the overnight train to Chiang Mai. I had found out about the Elephant Nature Park just outside of Chiang Mai and planned for us to visit and spend the night. This is an elephant rescue and rehabilitation center for elephants that have been injured and abused in the trekking, circus, and logging businesses. We learned the sad facts that elephants are not trained with positive rewards, but with punishment and pain. Many end up with broken bones, skin injuries, and even blindness. So the Elephant Nature Park was founded by a Thai woman, Lek, over 20 years ago to take in these elephants and provide a safe and natural environment for them to live out their lives. The park now has 70 elephants, and visitors can come for a day or an overnight stay, or for extended time periods as volunteers. We were taken around by guides and introduced to many elephants, got to feed them, watch them frolic in the dust and mud, and threw buckets of water on them in the river (though I think this was more for our benefit than for the elephants since it was so hot). These are truly impressive creatures, intelligent and social. And we were fortunate enough to be there when a baby was born. This is not a goal of the park since they focus on taking in injured elephants, but apparently one of the only two males they have found his way to a female about 22 months ago (yes, that’s the gestation period for elephants) and the result was the birth of Dok Rak, meaning flower of love, at 4 in the morning of the night we were there. So we were able to see her with her mother and grandmother later that day. (The males are now kept securely away from the females.) The park also takes in abandoned and needy dogs and currently has over 400! They try to find homes for them, so if you want to adopt a dog from Thailand this is the place. You can see lots of pictures of the elephants and dogs at their web site – http://www.elephantnaturepark.org.

After returning to Chiang Mai we did a little more exploring of the city, but found the heat so oppressive that we actually decided to go see a movie. And what would be more appropriate than The Jungle Book? The theatre was located in a huge shopping mall that puts many malls here at home to shame. We also greatly enjoyed the massage opportunities in Chiang Mai and the fish foot spa. I wish we could have this fish treatment here at home, though we couldn’t stop laughing as the fish nibbled at the dead skin on our toes.

Some street scenes from Chiang Mai:

After just a week with the kids, we parted ways, with Brad and Abbey getting a bus north to Chiang Rai and me taking the overnight train back to Bangkok. I finished my souvenir shopping with another trip to the Chatuchak Weekend Market (I felt like a seasoned traveler at this point, confidently taking the subway and tuk tuks around town) and topped off the trip with a Thai cooking class. I was with nine others – five girls from Hong Kong who had little cooking experience, a couple from Taiwan, and a couple from Ohio. We first went to a street market to learn about and buy the ingredients we’d be using, and then headed to the school where we prepared the ingredients for, cooked, and ate five dishes – tom yum soup, pad thai, spicy papaya salad, massaman curry, and mango with sticky rice. Everything was delicious and the whole thing cost only $30.

And so farewell to Thailand with the traditional greeting gesture called the wai – hands together as in prayer with a slight bow, shown even by Ronald McDonald. 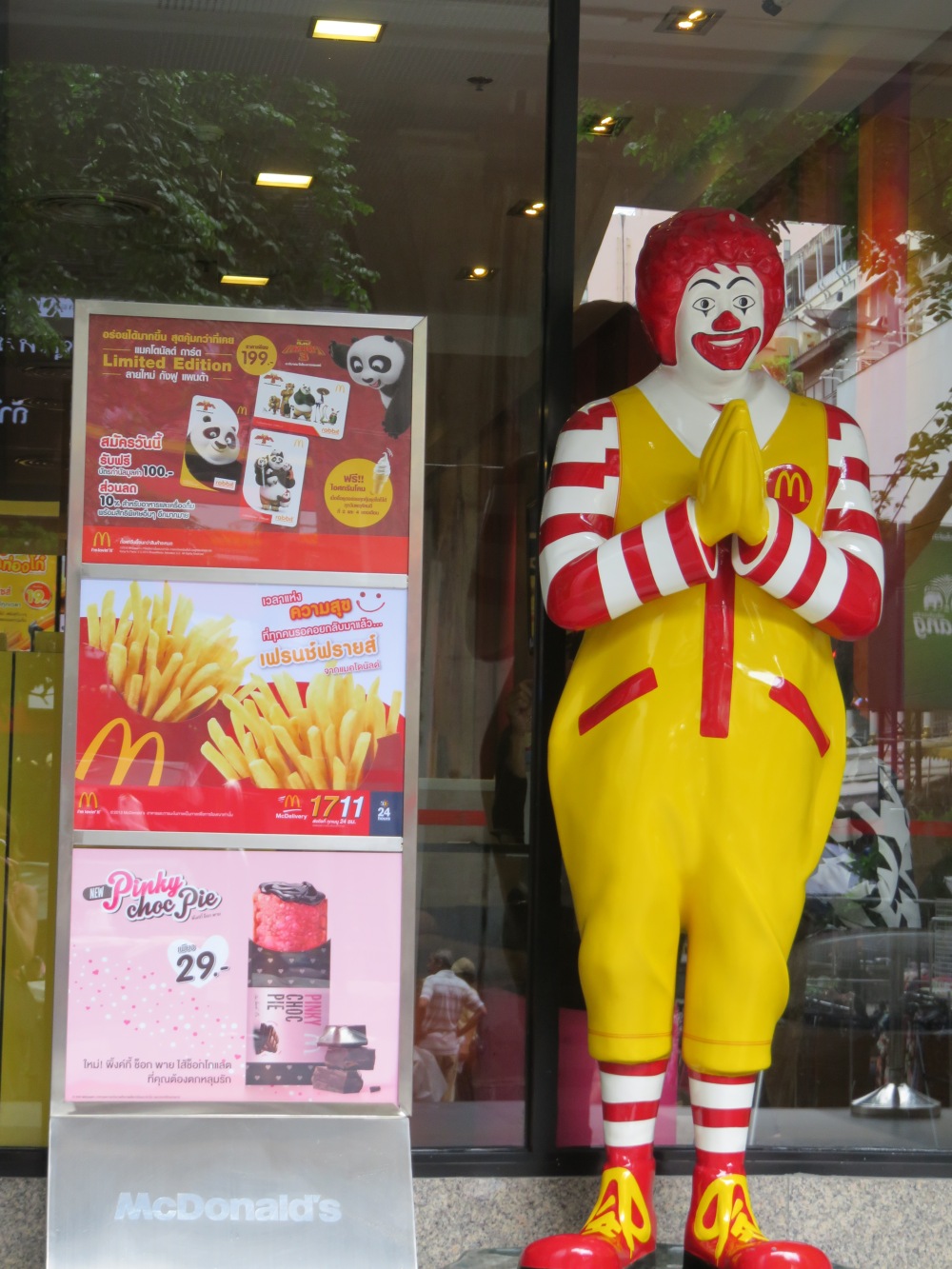 The trip was definitely worth it, but if I were ever to go back, it would be in December or January!

P.S. In the previous posting, I don’t think Abbey made it clear that she was the Westerner who was chosen to present the winner of the Muay Thai boxing match with the garland of flowers. Here she is.